Postmen in city switch to e-bikes..

Postmen in city switch to e-bikes from cycles

Gurgaon: Moving away from the classic image of a cycle-riding postman, the district postal department has introduced e-bikes for postal delivery, in a pilot project launched in DLF Phase I on Friday. It has also provided solar energy panels to two post offices in the city.

The project has been initiated on experimental basis, and other post offices will be absorbed over time. Senior officials said six rented e-bikes have been introduced as of now, and the average running cost of each comes up to Rs 1.50/km, inclusive of electricity and maintenance.

"This initiative has been taken in support of a pollution-free environment. Besides, it will also help in speedy and prompt delivery of mail," said Umesh Verma, post master general. 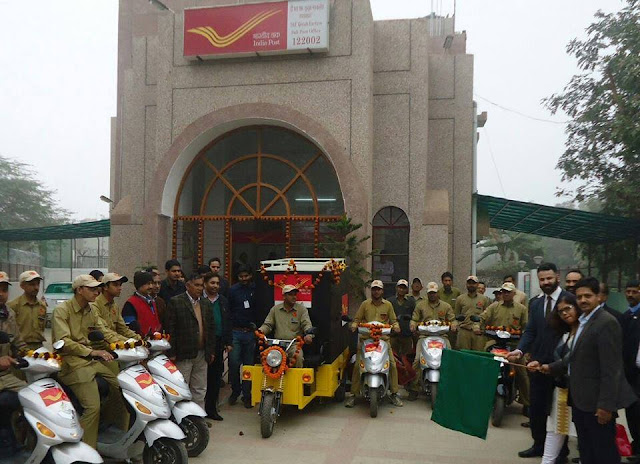 Postmen have welcomed the introduction, though they accept the new mode of transport will take some time getting used to. Officials from the department said the e-bikes have made a postman's job much easier and comfortable, saving close to two hours each day.

As a part of the project, the Gurgaon postal division has also installed solar energy panels of 2kVA at the post offices in DLF Qutub Enclave and DLF phase-II. These solar panels have been connected with commercial inverters to provide uninterrupted electricity to the two post offices.

"These measures will not only help us contribute in keeping the environment clean, it will also help us bringing down costs after the initial investment," said Verma.