The Recommendations of GDS Committee is still under  the consideration and mandatory approval of the Finance Department of MoF. It is well aware that for the last 4 months the file is being moved in between DoP & MoF. The delay caused much resentment among the GDS cadre as the Committee Submitted its report on 24th Nov 2016 i.e., almost one year.

The process of GDS membership verification had been commenced during March 2016 and notification given during June 2017. It is well known that the collection of Letters of Authorization from the GDS members is a very tedious & strenuous task. As per the old procedure, Letters of Authorizations have been collected from the GDS members in 23 circles by all participant unions as per the guidelines and instructions issued by the Department and submitted on 5th September 2017.

While the process of Recognition of Service Associations is going on, astonishingly, the Directorate has stopped the process of verification (lr. dated 06-10-2017) for the reasons best known to the concerned.

The AIPEU-GDS participating in the membership verification after a long waiting of 5 years i.e., from April 2012 and seeking recognition in this Membership Verification. We are demanding the Department to continue the process as per the schedule of the Notification issued and pronounce the results of membership position for the participant unions in GDS cadre. 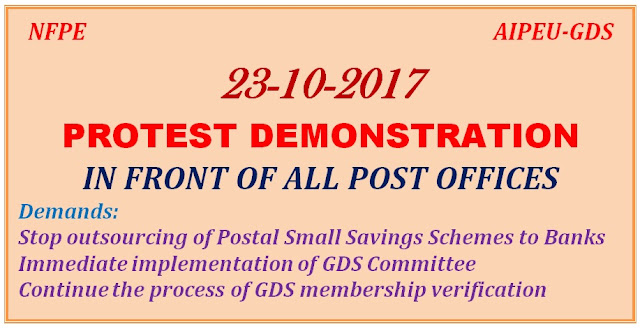 The NFPE & AIPEU-GDS decided to proceed with the series of agitation programmes to resolve our justified demands. The programme on 23rd Oct 2017 i.e., protest demonstration in front of all Post Offices by the members of NFPE Unions and AIPEU-GDS would become a resounding one to show our resentment over the attitude of the Govt & Department towards GDS.

All are requested to participate in the agitation programme on 23rd and make it a grands success.

Posted by P. Pandurangarao a
Posted by KUDANTHAI ANJAL at 22.10.17