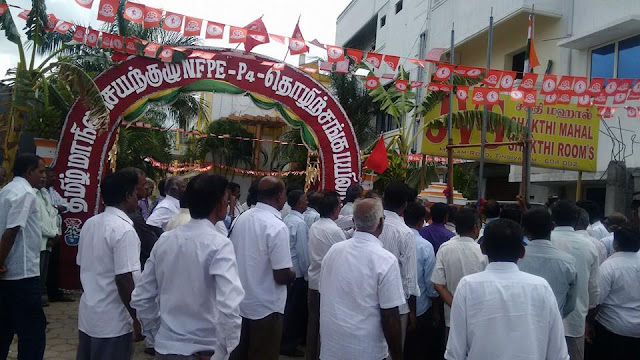 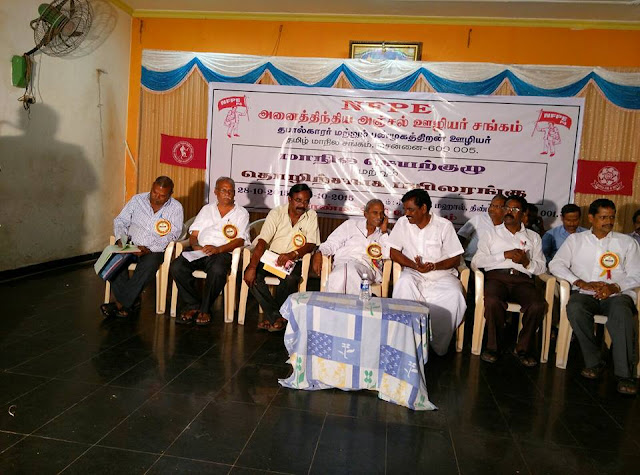 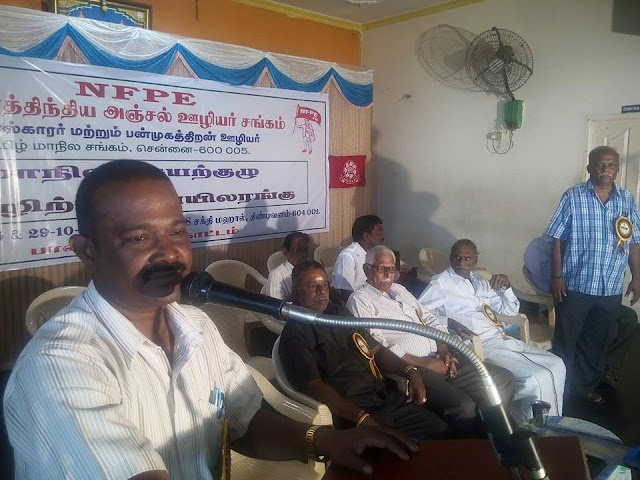 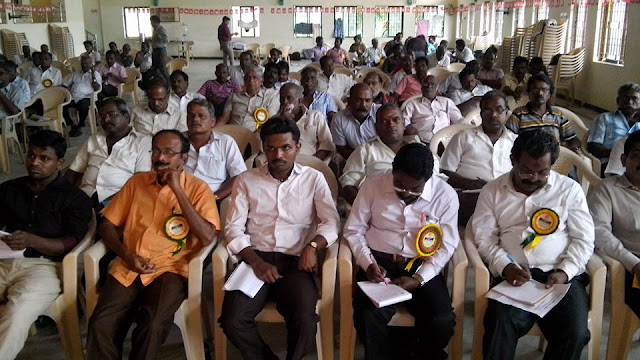 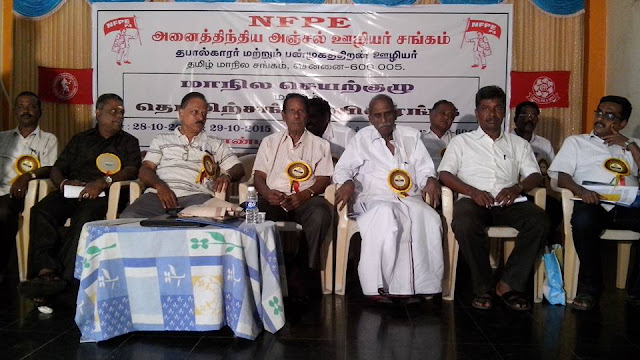 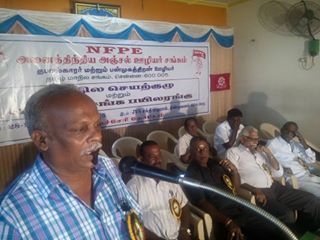 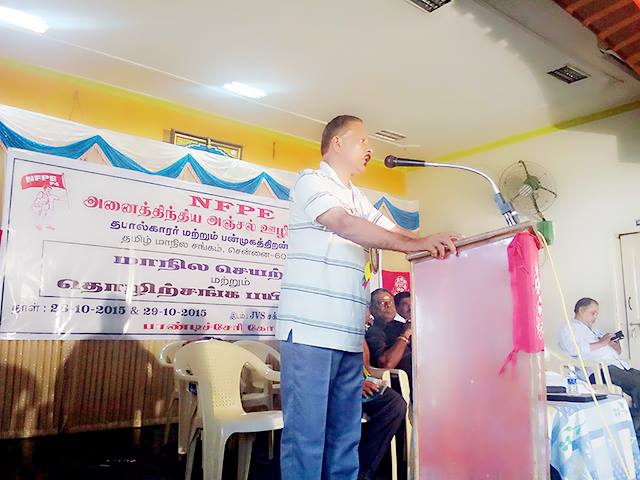 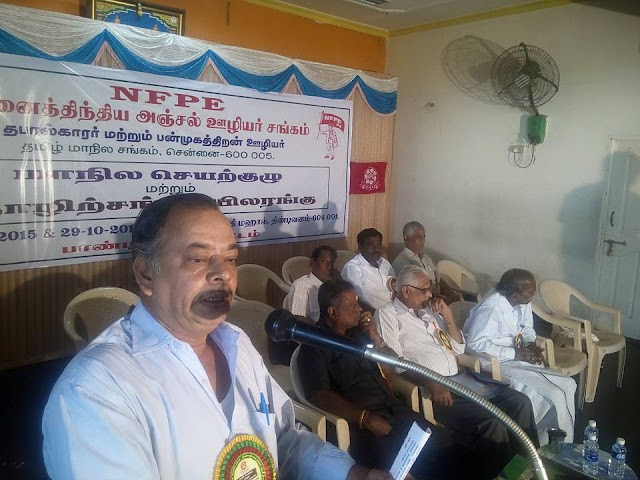 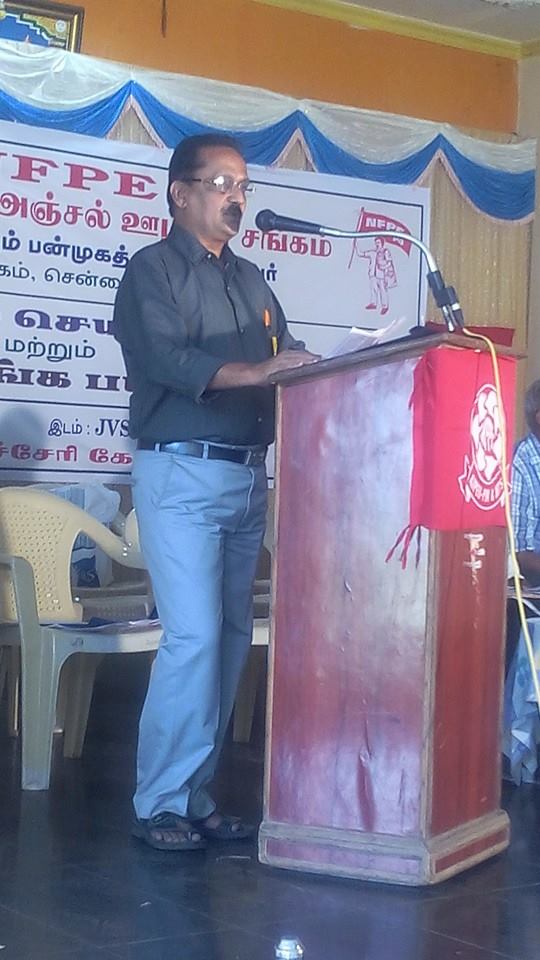 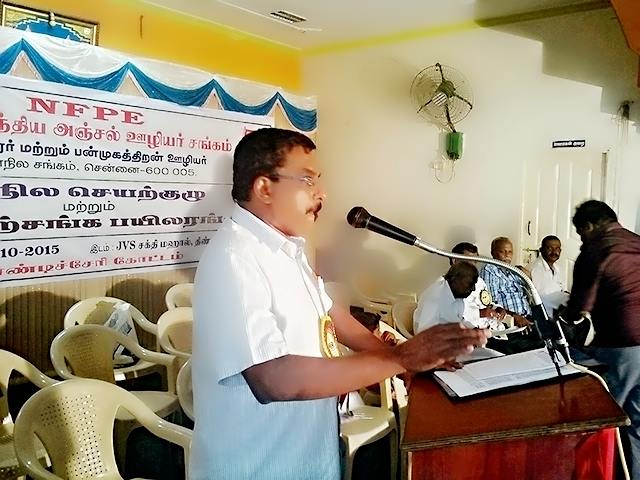 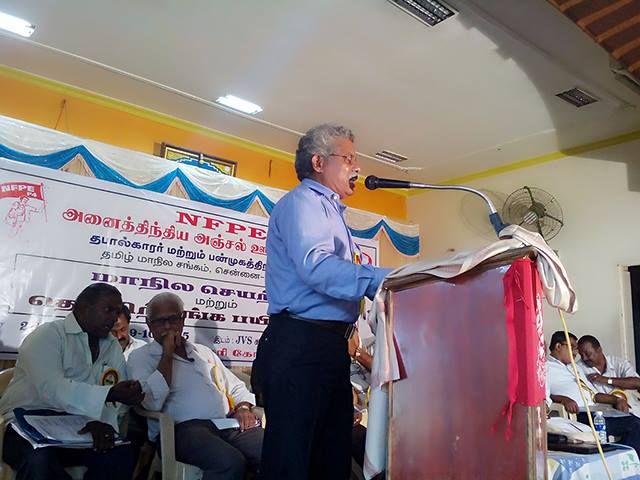 Posted by All India Postal Employees Union – Group ‘C’ Tamilnadu Circle at 8:29 AM
Posted by KUDANTHAI ANJAL at 30.10.15 No comments: 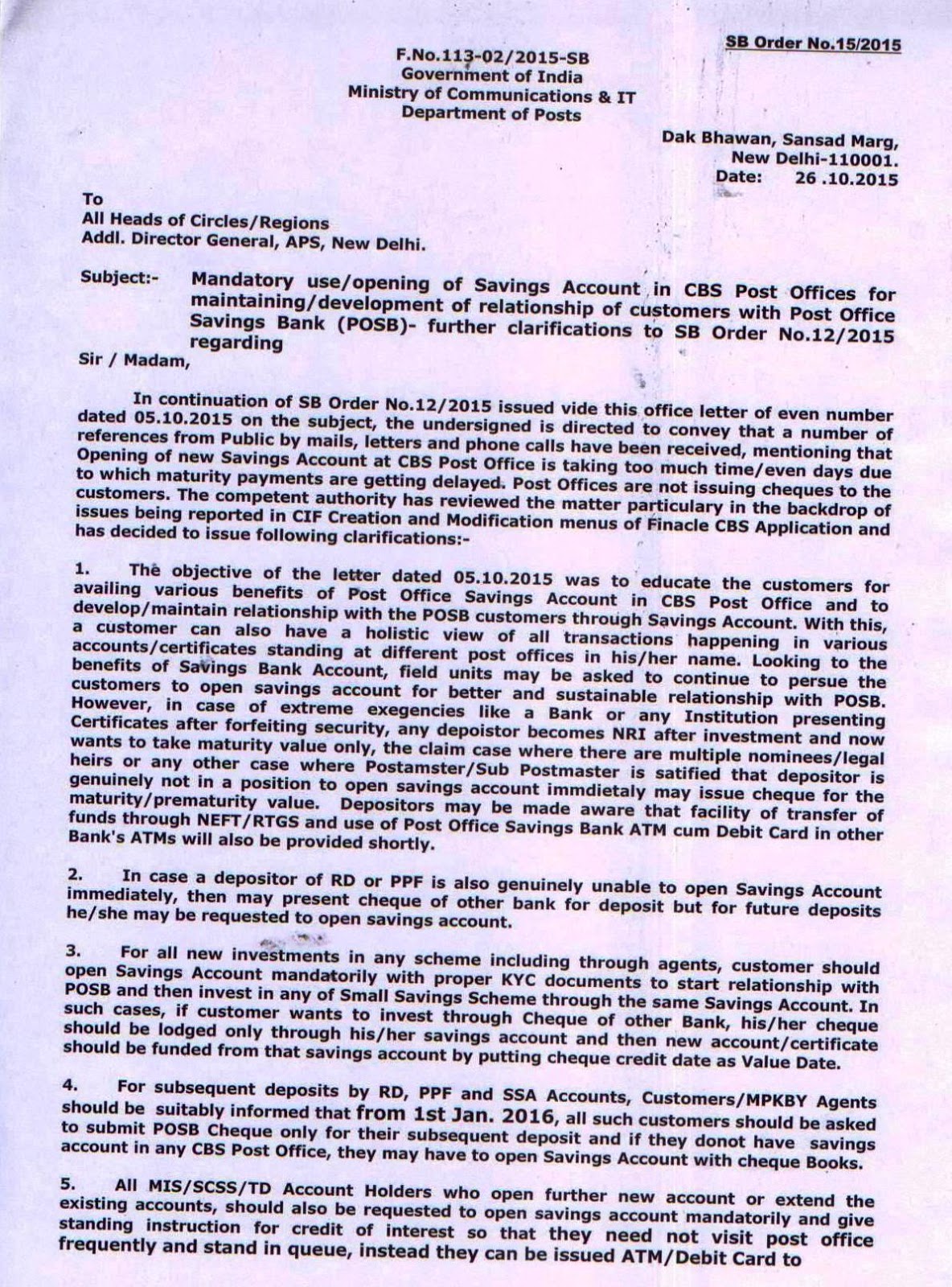 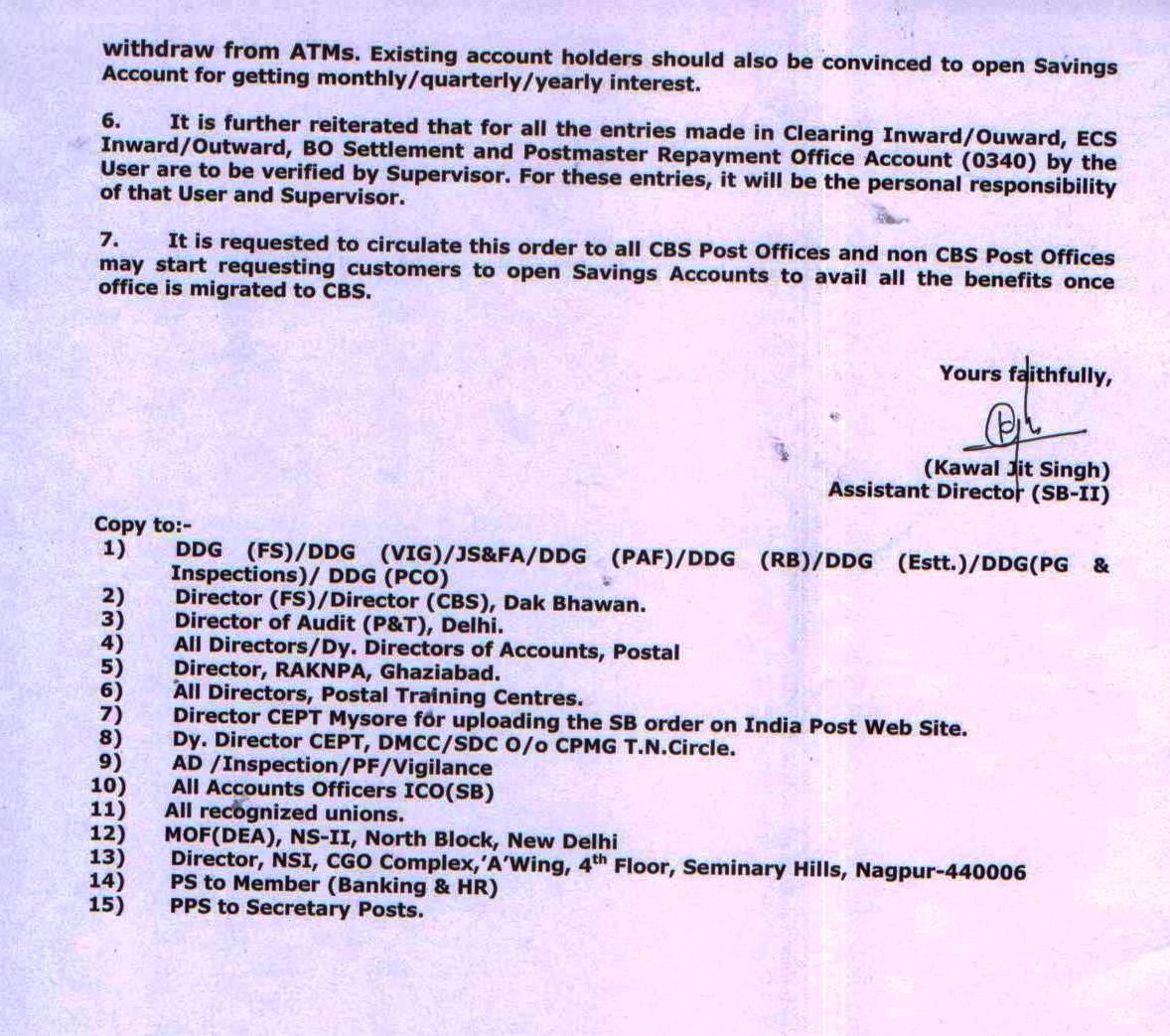 India Post is among the 11 successful entities that recently got in-principle approval for a payments bank licence from the Reserve Bank of India. Tentatively named as 'India Post Payments Bank,' the entity will have an initial capital of Rs 300 crore.'

"We are looking to leverage our entire postal network," said Ramanujan. He said banks will pay a small fee to use the services of the
postal department depending on the location, details of which are being worked out.

A senior finance ministry official said the government is looking to focus on financial literacy as part of its financial inclusion programme. "Now that the accounts have been opened, we want to ensure that people take advantage of all other schemes, including soft loans under the MUDRA Yojana," said the official, who did not wish to be named.

So far, about 18.86 crore accounts have been opened under the Pradhan Mantri Jan Dhan Yojana (PMJDY), with deposits of nearly Rs 25,700 crore.

"Around 40% of these accounts have zero balance. We want them to develop a habit of banking, so that they can have a credit history and use other services," the official said.

The Centre had last year launched three social security programmes - the Pradhan Mantri Suraksha Bima Yojana (PMSBY), the Pradhan Mantri Jeevan Jyoti Bima Yojana
(PMJJBY) and the Atal Pension Yojana (APY) - to bring the excluded under the fold of formal financial services. The drive is billed as 'Jandhan to Jansuraksha' or people's money to public security.

The government has set a target of Rs 1.22 lakh crore for loans to be given by staterun banks to promote new entrepreneurs under the Pradhan Mantri Mudra Yojana, which will seek to "fund the unfunded".

The Postman Rings a Second Time
Posted by KUDANTHAI ANJAL at 25.10.15 No comments:

While metros like Bengaluru, Delhi and Mumbai led in terms of the sales, the e-commerce firm said it saw a huge surge of interest from tier II cities.

E-commerce major Flipkart on Wednesday said it has sold half a million mobile handsets within 10 hours as part of its The Big Billion Days sale.
“This sets a record for the highest number of mobile phones sold in India in a short period of ten hours in any platform, either online or offline,” Flipkart said in a statement.
Flipkart’s Big Billion Days festive sale started on October 13 and will end on October 17. The sale of mobile phones opened on midnight last night.
While metros like Bengaluru, Delhi and Mumbai led in terms of the sales, Flipkart said it saw a huge surge of interest from tier II cities with Nagpur, Indore, Coimbatore, Vishakhapatnam and Jaipur leading in sales.
The Bengaluru-based firm said the platform also saw huge sales of 4G-enabled devices.
“75 per cent of the phones sold during the ten-hour period were 4G phones,” it added.
“It has been a blockbuster beginning for our mobile-category sale. The record sale of half a million mobile handsets is truly a testament to the growing demand for smartphones in India,” Mukesh Bansal, Head of Commerce Platform, Flipkart said.
On the first day of sale, Flipkart had sold 10 lakh products in the first 10 hours with six million visits from across the nation and 25 items sold per second.
“Bengaluru, Delhi and Chennai have emerged as the chart toppers in terms of visits from metro cities, and Ludhiana, Lucknow and Bhopal from the non-metro cities,” Flipkart said had in a statement.
Flipkart offers over 30 million products across more than 70 categories, including books, media, consumer electronics and lifestyle.
The company employs 33,000 people, has 50 million registered users clocking over 10 million daily visits and enables delivery of over eight million shipments a month.
Keywords: Flipkart, Big Billion Day, e-commerce, smartphones
SOURCE- THE HINDU
Posted by KUDANTHAI ANJAL at 24.10.15 No comments:

New Delhi: The Cabinet today decided to double the wage ceiling for calculating bonus to Rs 7,000 per month for factory workers and establishments with 20 or more workers.

“The Payment of Bonus (Amendment) Bill, 2015 to enhance the monthly bonus calculation ceiling to Rs 7,000 per month from existing Rs 3,500 was approved by Union Cabinet here,” a source said after the Cabinet meeting.

The amendment bill will be made effective from April 1, 2015. Now the bill will be tabled in Parliament for approval.

The bill also seeks to enhance the eligibility limit for payment of bonus from the salary or wage of an employee from Rs 10,000 per month to Rs 21,000.

The Payment of Bonus Act 1965 is applicable to every factory and other establishment in which 20 or more persons are employed on any day during an accounting year.

The bill also provides for a new proviso in Section 12 which empowers the central government to vary the basis of computing bonus.

The last amendment to both the eligibility limit and the calculation ceilings under the said Act was carried out in 2007 and was made effective from April 1, 2006.

This amendment in the Act to increase wage ceiling and bonus calculation ceiling was one of assurances given by the Centre after 10 central trade unions went on one-day strike on September 2.

The government had hinted at meeting workers’ aspirations on nine out of 12 demands submitted by the unions.

Discontinuation of Interviews at the junior level posts

Discontinuation of Interviews at the junior level posts - Workshop regarding. 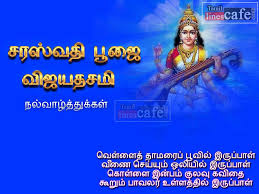 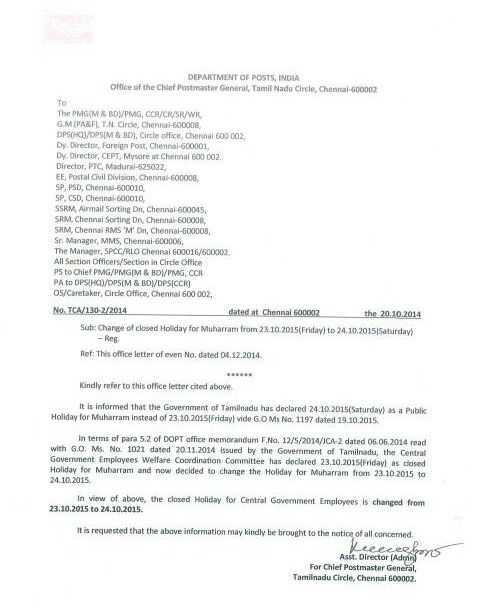 How to Rebook B.O RPLI Transaction in McCamish

How to  Rebook  B.O  RPLI  Transaction  in McCamish

I. One User lD needs to be created for each BO in its account office.

ii. In the Account Office, transactions of BOs will be rebooked using this User ID of concerned BO by official of the account office. (Log needs to be maintained daily)

iii. Reports of such transactions of BOs concerned may be generated for each such BO by account office.

This solution has been designed for the time being and more simplified process is being devised and will introduced shortly, so that, transactions done during the last working days of month may also be rebooked in account office without any trouble.

The original order is shown below. 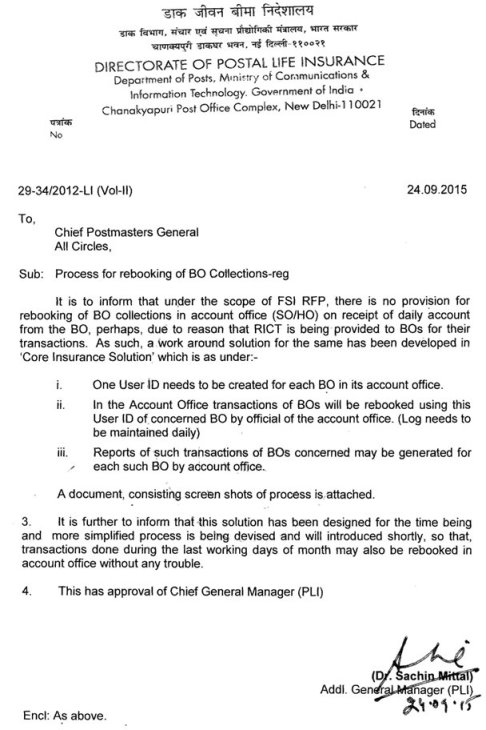 (Note: Before viewing the Call Letter, kindly make sure that  A4 size paper   is selected and both Top and Bottom margins of the print area will have only 5 mm)

Know your Roll Number, Date of Examination and Centre/City

3. Candidates should bring Admission Certificate (AC) downloaded from our website or AC received by post for admission in the exam.

4. Candidates must carry a photo-bearing Identity proof in original such as Driving License, Voter Card, Aadhaar Card, Identity Card issued by the University/College, PAN CARD for identification/verification, failing which he/she will not be allowed to appear for the exam. 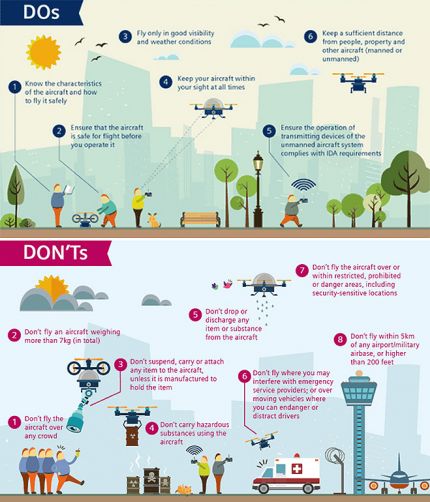