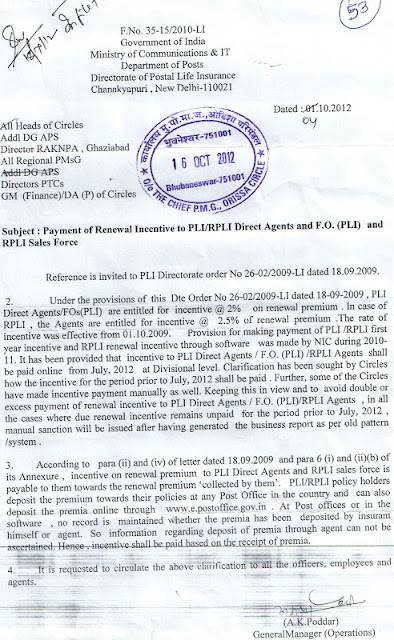 POSTMAN/MAIL GUARD & MTS EXAMINATION. THE SCHEDULE
GIVEN BY DE SECTION IS NO MORE OPERATIVE AND THE
INSTRUCTIONS DATED 8-10-2012 IS WITHDRAWN WITH
IMMEDIATE EFFECT..
No. A-34012/01/2012-DE
Government of India
Ministry of Communications &IT
Department of Posts,
(DE Section)
Dak Bhawan, Sansad Marg.
New Delhi-110116
Dated 19th   October, 2012

SUB: HOLDING OF LIMITED DEPARTMENTAL
COMPETITIVE EXAMINATION FOR DILLING
THE POSTS OF POSTMEN/MAIL GUARDS
AND MULTI TASKING STAFF AS PER
REVISED RECRUITMENT RULES.

2.     Subsequently, the nodal branch staff  section
vide letter no. no. 45-2/2011-SPB.1 dated 18-10-2012
issued detailed  instructions to the circles for filling
the vacancies by holding separate examinations
for each year vacancies and given specific schedule
and to complete the process  by 30th  June 2013.

3. In view of this revised position, the schedule given
by DE section has no more operative and the instructions
dated 8-10-2012 is withdrawn with immediate effect.
The circles are requested to follow the guidelines
issued by SPB.1 section letter no. 45-2/2011-SPB.1
dated 18-10-2012 scrupulously.

4.   This issues with the approval of Competent Authority.

FRAGMENTED STRIKES WILL WEAKEN THE EMPLOYEES- GDS STRIKE - A LESSON

Thousand lies can never become a truth nobody can break the unity of postal workers lessons of the fragmented strike *
The GDS strike of Mahadeviah group ended on 22.10.2012.  In fact it was fizzled out.  Eventhough from 16.10.2012 onwards the leaders claimed 100% participation in all circles, the truth was entirely different.  Out of 22 circles, in 10 circles it was less than 5% and 6 circles only less than 10% of the Gramin Dak Sevaks went on strike.  In the remaining six circles it varied from 12% to 27% of the GDS. All India average of the strike is 18.1% of the total GDS.  This is the real picture of the strike.  All other claims are false and naked lies.  The percentage came down day-by-day and on 22  nd the All India average was only 5% of the total of about three lakhs GDS.  Thus the strike fizzled out without any settlement.  (Those who have doubt about the figures can get it under RTI from all Circles and verify the truth).  Senior officers of the Department including Secretary, Department of Posts, Member (Personnel) and Minister Communications and Minister of State for Communications also rejected the request of the leaders for a last minute face-saving settlement.

NFPE has not made any adverse comment or statement against the strike or against the false claim of the leaders regarding All India Strike percentage, eventhough the Mahadevaiah group spread canards against NFPE and its leaders before the strike and also during the strike.  If NFPE had put it in its website the actual percentage of the strike in each circle, the strike would have fizzled out in the second day itself.  But NFPE never wants to break any strike, whether percentage is less or large.  Breaking the strike is not the tradition of NFPE.  So we tolerated every malicious attack against NFPE and its leaders till the strike is over.  Even now, while exposing the lies and hidden agenda of the Mahadevaiah group, we respect the sentiments of the GDS who participated in the strike without knowing the evil designs of the leadership.  We hope that those GDS who are misguided by the leaders, shall join the united struggle of the Central Govt. Employees on  12thDecember 2012 and also join the united movement of the Postal Employees led by National Federation of Postal Employees.

Everybody knows that the attack against the Postal Employees, whether it is GDS regularization or New Postal Policy 2012, is due to the neo-liberal economic policies pursued by the Central Government.  To fight against these policies, the largest unity of the employees and workers is the need of the hour.  Other than united struggle there is no shortcut.  When NFPE is trying to build up such a united struggle, unfortunately everytime the Mahadevaiah group is trying to break the unity at any cost.  During 2008 when NFPE and all its affiliated unions decided to go on indefinite strike from 06.01.2009, against the retrograde recommendations of the Natarajamurthy Committee, Mahadevaiah gave a call for indefinite strike from 17.12.2008, i.e.,  20 days ahead of the joint strike of NFPE.  Now again, due to our efforts when all the employees unitedly decided to go on strike on 12th December 2012, in which GDS demand is also one of the main demands, Mahadevaiah gave another sudden indefinite strike call from 16.10.2012.  He is playing in the hands of the ruling class and deliberately trying to break the unity among the departmental employees and Gramin Dak Sevaks.  The leader is behaving as an agent of the Government and poor GDS are the victims.  GDS are not going to be benefited by such sectarian strike.  Realising this majority of the GDS refused to join the ill-motivated strike this time.

On 10.05.2012, Sri. Mahadevaiah made following comments in his signed circular, copy of which is available with us:-  “The AIPEDEU is the single largest Postal Union, larger than all other Postal organisations, including NFPE......  They are afraid of AIPEDEU” (!!!).  When somebody claims that I am bigger than everyone else and all are afraid of me, we can imagine the mindset of such a person.  NFPE leaders will never make such egoistic statements.  Again in another circular which was circulated among the GDS throughout the country without putting name, the following derogatory and insulting comments are made against the legendary leader of the Postal Trade Union movement Late Com: K.Adinarayana - “Nobody including the great person repeatedly mentioned as the messiah of Postal workers including EDAs could even stir.  What was he doing?”  Thus it is very clear that the intention of Mahadevaiah is to project himself above all the leaders of the Postal Trade Union movement right from Tarapada to Adinarayana.  In fact he was elected in the year 1999 and became the General Secretary of the only recognised Union with the help of Com. Adinarayana and NFPE.  But after 1999, there was no gain for GDS, eventhose benefits achieved by NFPE through several years of struggle upto 1999, was taken away by the Government during the tenure of Mahadevaiah.  He continued his attack against NFPE.  His number one enemy is NFPE.  This time the leader thought he can score through making it a fragmented game.  He want to avoid larger unity of entire Postal employees (Departmental and GDS) and also he want to avoid NFPE as he thought that if he join the joint struggle with NFPE he cannot become the hero.  He wanted to play one-upmanship over NFPE.

Naturally those who loved NFPE said “goodbye” to such a leader who is undemocratic, anti-NFPE, egoistic and decided to form separate GDS Union called AIPEU-GDS (NFPE) declaring themselves that they will work under the banner of NFPE and will be a part and parcel of NFPE.  NFPE decided to give associate membership to the new GDS Union led by Com. Panduranga Rao.  After formation of the new NFPE GDS Union Gramin Dak Sevaks of majority of the Circles joined the new union enbloc.  Remaining circles also GDS stated deserting Mahadevaiah group in a big way and joined NFPE GDS Union.  The very existence of the so-called recognised union was challenged due to the mass-scale exodus of the GDS.  Even in Karnataka which is the home-circle of the leader, 60% of the GDS joined the new union.  (Anybody can collect the strike percentage of Karnataka Circle under RTI and verify the fact).  It is at this moment the leader decided to declare a sudden strike from 16.10.2012 for his own existence and to prevent remaining GDS from deserting him.  But majority of the GDS realised his hidden agenda and refused to join the ill-motivated strike.  That is why the strike fizzled out and ended without any settlement.

NFPE calls upon the entire Postal Employees including Gramin Dak Sevaks to draw lessons from this fragmented strike and guard against those elements who are trying to break the unity of Postal employees again and again by spreading hatred among Departmental employees and Gramin Dak Sevaks.  Let us defeat such forces of destruction and unite together under the banner of our great organisation, National Federation of Postal Employees.  Let us strengthen the new GDS Union, AIPEU-GDS (NFPE) and ensure cent per cent unity among all Postal employees.  Let us work unitedly to make the historic strike of 12 December 2012 a grand success.

Remember, we are fighting against the anti-people, anti-working class policies of the Central Government.  Only a class oriented militant trade union like NFPE can alone build the unity of the entire Postal Workers and lead such a struggle in the Postal department.  Fragmented strike will create disunity and disappointment and will weaken the striking potential of the Postal employees and  ultimately the Govt. will take advantage of it.  Our enemy is the ruling class and all the toiling masses are our comrades-in-arms in the struggle against the imperialist neo-liberal globalization policies of the ruling class.  Let us not allow anybody to break this unity.
25.10.12                       M. KRISHNAN, SECRETARY GENERAL  NFPE
Posted by All India Postal Employees Union – Group ‘C’ Tamilnadu Circle at 4:3

Messege of the day


Messege of the day 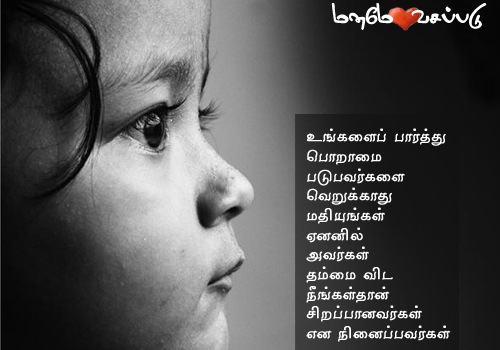 MINUTES OF THE BI-MONTHLY MEETING WITH THE PMG, CR


MINUTES OF THE BI-MONTHLY MEETING WITH THE PMG, CR 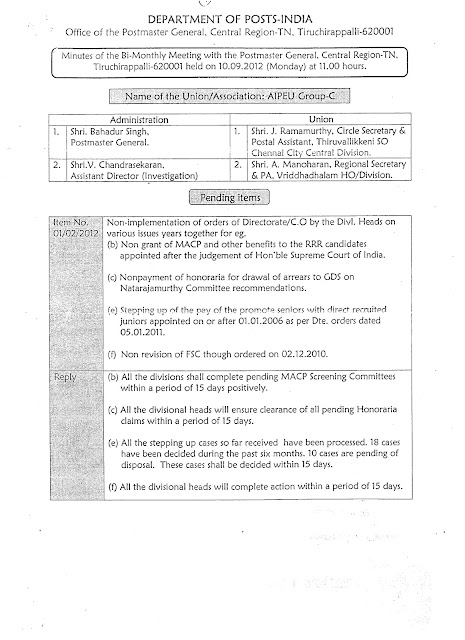 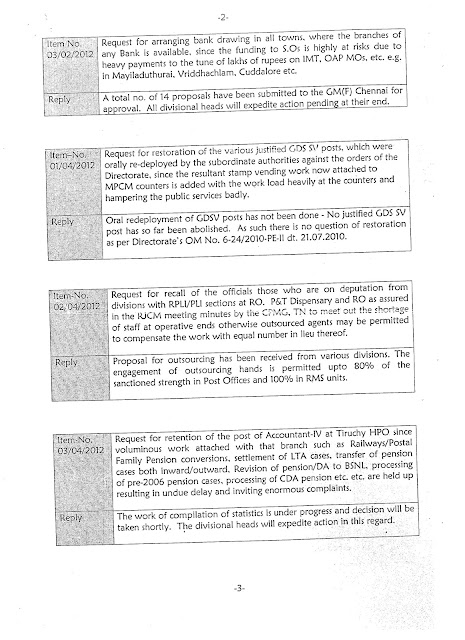 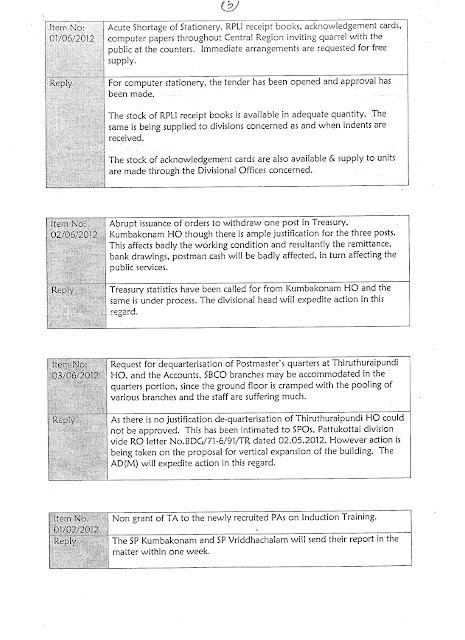 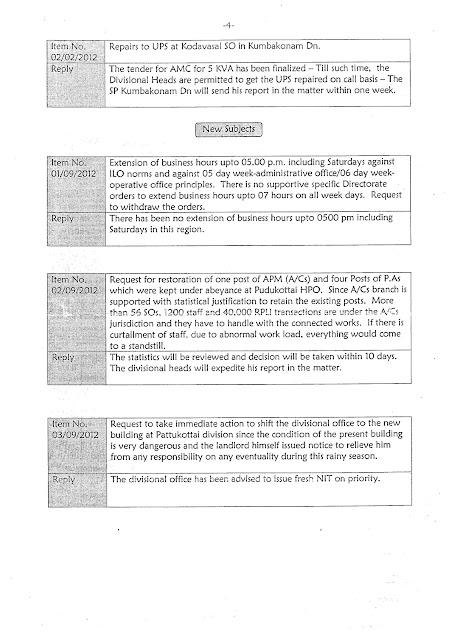 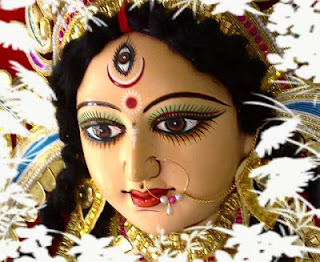