OUR GENL. SEC. SUBMITTING MEMORANDUM
TO HONBLE MOS FOR COMMUNICATIONS & IT

Hon'ble Minister of State for Communications & IT 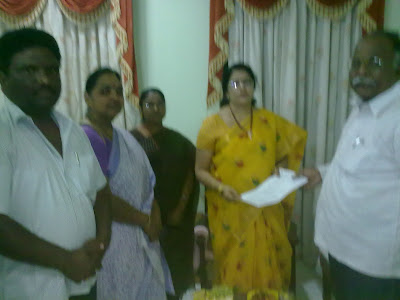 Hon'ble Minister assured to take necessary
swift action to settle  the issues as early as possible.

COMRADE K.V.SRIDHARAN AS CHAIRMAN
AND COMRADE K.RAGAVENDRAN AS
GENERAL SECRETARY TO GUIDE THE RECEPTION COMMITTEE.

IN A MEETING ATTENDED BY ALL CHQ OFFICE BEARERS,
CIRCLE SECRETARIES, CIRCLE OFFICE BEARERS
AND DIVISIONAL LEADERS OF NFPE UNIONS,
THE FULL FLEDGED RECEPTION COMMITTEE HAS BEEN FORMED.

TAMILNADU IS PREPARING TO INVITE ALL
DELEGATES AND VISITORS OF THE 1st AIC
OF AIPEU GDS [NFPE] AT CHENNAI FOR
CONSOLIDATING THE UNITY OF ALL POSTAL EMPLOYEES.

HERE ARE SOME PHOTOS OF

THE MEETING OF THE FORMATION
OF RECEPTION COMMITTEE TO THE 1st AIC. 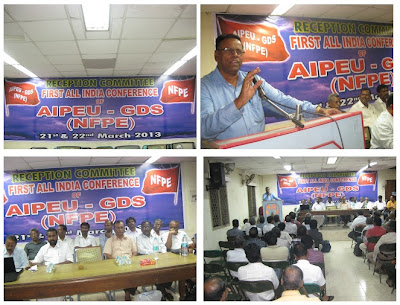 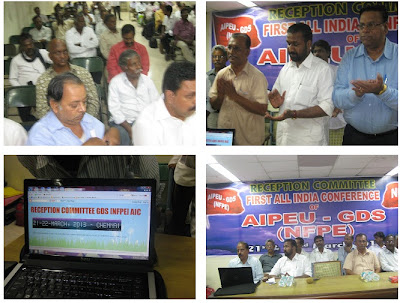 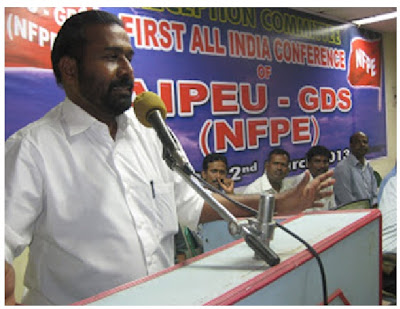 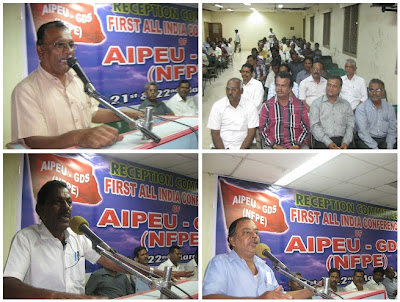 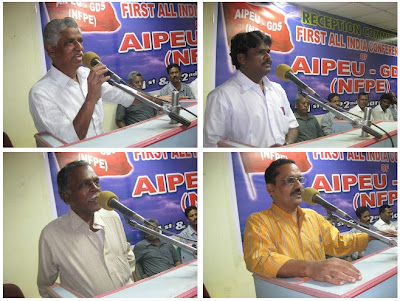 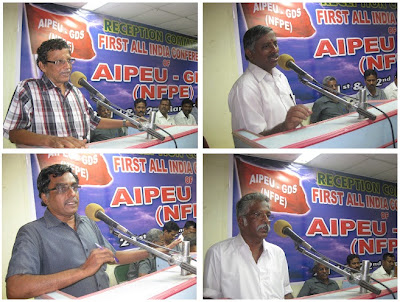 The JCM Departmental Council Meeting was held on 28.12.2012.
As reported by Com. K. V. Sridharan, Leader Staff Side,
the gist of certain decisions on the subjects are furnished hereunder.

(1) At the outset, the Staff Side declared that in the event of
non finalization of cadre review proposals immediately and if
linked it with the modernization, the Staff Side will not cooperate
the project of modernization and its implementation. Then it was
assured to finalise the proposals shortly after a convening a
Staff Side meeting early.

(2) The linking of fresh establishment review for the proposal
of peripheral HRA will be dropped. Whenever State Government
declares merger of urban areas, proposals for the enhancement
of HRA will be undertaken.
(3) Proposal to recruit the PA through Staff Selection
Commission will be taken for consideration after some time.
(4) PA Recruitment (Open Quota) will be completed in three
phases from 27.01.2013 to 3.3.2013. The candidates will be
made under three groups in each circle and exam will be
conducted in three batches in between Jan to March 2013.
After the exam, computer test will be made among the
shortlisted candidates and the recruitment process will be over
in the month of June 2013.
(5) The conditions imposed in the last IP exam that
‘no disciplinary action is pending or contemplated and
no adverse entry in last two years’ etc. will be withdrawan.
(6) Grant of Flexi working hours not possible for POs.
(7) As the soil is not fit for construction of two storied
buildings at Kodialkol Mangalore, alternate building
will be finalized shortly.
(8) Construction work will commence within 15 days
in respect of the Itanagar HPO building.
(9) Chief PMG NE intimated that there is no request or
requirement for construction of staff quarters in Imphal.
(10) Replacing kerosene generators will be ordered.
(11) The fixing uniform incentive for MTS work will be considered.
(12) As the verification of withdrawal will not be necessary
after 30.06.2013, the expected date of core banking introduction,
the enhancement of limit for verification need not be insisted.
(13) RBI has directed SBI to recover the amount irregularly paid to
the depositor in the PPF account in the case of Mysore HO.
(14) Non counting of the APS service for MACP – not agreed.
(15) An appeal filed in the High court Jodhpur against the
CAT orders on MACP in respect of promotees.
(16) Fixation of Pay of MTS & irregular Audit objection by
DAP Kolkata – will be referred to DOPT.
(17) A reference will be made to DOPT about our demand on
Dies non period shall also be taken as continuous service for MACP.
(18) Recovery of postage in case of foreign articles returned due
to non availability service – will be considered favourably.
(19) Clarification will be issued to fix the minimum pay of
Rs. 5200 + 1800 to canteen employees.
(20) Payment of the difference in encashment of EL for
LTC – Not agreed and stated the clarification is issued
as per the DOPT orders.
(21) Carving out of Postmaster Grade III will be carried out shortly.
HSG-I posts will be filled up as per the old Recruitment Rules.
The DOPT has been approached for approval. Assured to cause
orders within a month and immediately the PM Grade III
will be carved out.
(22) Abolition of skeleton vacancies for 2006 to 2008 is
based on the refusal of our demand by MOF & Nodel Ministries.
We insisted that the vacancies abolished earlier inadvertently
shall be adjusted. The DDG replied that all the circle heads replied
that there was no such abolition earlier. We pointed out the case
of the West Bengal circle in PA & Postmen vacancies.
No decision was emerged.
(23) Orders have been issued to constitute DPC at once
for promotion of LSG & HSG II Promotions.
(24) Relaxed standard to GDS in PA appointment for SC/ST candidates.
This is under examination.
(25) All the vacant postmen, Sorting Postmen Posts will be
filled up before May 2013.
(26) Grant of higher Out station Allowance for RMS staff will be
considered on the basis of Grade Pay instead of Designation.
(27) Amendment will be made in the recruitment rules
of Sorting Asstt. in the constitution of DPC for confirmation.
(28) Recruitment Rules for PA (Circle office) is pending with Ministry of Law.
(29) Group B exam related issues – will be discussed in a separate committee.
(30) Clarifications will be issued on drawal of Grade pay to
pharmacists of P&T Dispensary.
(31) Amendment is expected on the eligibility of family pension
to married physically handicapped wards. It will be expedited.
(32) Orders will be issued to step the case of promotee seniors
up to the issue of Pay Commission orders from 1.1.2006.
(33) One time option will be provided to the officials whose
increment falls between Feb 2006 to June 2006.
(34) Instructions will be issued not to make any recovery from
those retired from 1.1.2006 to 31.08.2008 in respect of
excess payment of commutation amount.
(35) Reference will be made for the grant of Grade pay of
Rs. 1800/- to MTS who retired/expired from service after
31.08.2008 without having been imparted training.
(36) Orders on agreed items discussed in the postmen
committee will be expedited.
(37) Irregular commutation of LR strength – It was agreed
to verify the old files of 1964 & 1975 and ascertain the
correct position on LRs and will initiate action.
(38) All PTCs will be instructed not to insist Dress code,
Uniform etc. A common standard will be circulated.
In respect of PTC Madurai, the successful 12 candidates
will be provided promotion.
(39) Orders will be issued shortly for upgradation of pay to
the erstwhile Group ‘D’ selected under blind quota
who are still remaining in IS scale.
(40) Provisions will be made to get information about the
GPF through Internet shortly.
(41) Discrimination in the service condition in
LGO - DOPT not agreed for any further relaxation.
(42) All the sections have been instructed to update all Postal Manual
Volumes and reference books before 15.02.2013.
(43) Bifurcation of Baster and Raigarh divisions will be considered.
(44) It was agreed to revise commission for Aadhar Card related works.
(45) The transfer of staff from L2 against the willingness will be stopped.
(46) Clarification will be issued for stepping up of pay to Postman
and Group ‘D’ as per Divisional gradation List.
(47) The restriction on the second posting in single handed post offices.
Orders exhibited in the website.

The above are only the important subjects discussed among the 88 items.
The items which were earlier discussed in the Standing Committee
meeting were not discussed again. The Leader staff Side stated .
that the decision on certain items in the stating committee
meeting required reconsideration to avoid disagreement to be
recorded for referring the case to the Board of Arbitration.
The meeting ended with thanks to the chairman who had
convened two JCM meetings and two standing committee
meetings in one year.
Nothing more to my pen now!
Once again I wish all of you a Happy & Prosperous New Year 2013.

With fraternal greetings,Comradely yours,
(R. Sivannarayana)
General Secretary
Dated 31.12.2012
Posted by KUDANTHAI ANJAL at 3.1.13 No comments: